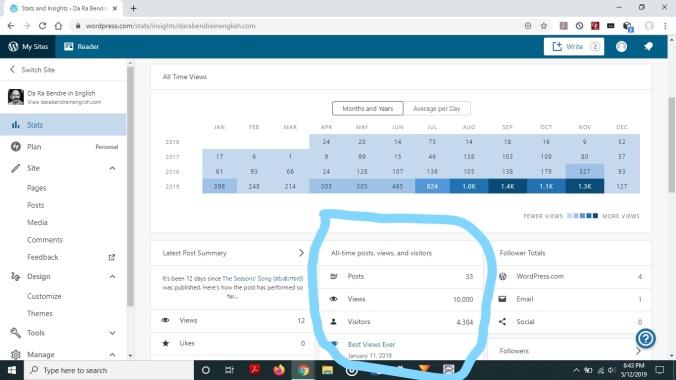 I began the blog-website (www.darabendreinenglish.com) some three-and-a-half years ago on the advice of a couple of well-wishers who, appreciating what I was trying to do, suggested I move my work from the ephemeral illusion that is Facebook to the less-ephemeral reality of a blog. Since then, I have used this blog-website as a bit of a laboratory; that is to say, as a place to experiment with different ways to present and publicize (to the world at large) the English avatara-s of the remarkable Kannada poetry of Da Ra Bendre. What began in a flurry of enthusiasm (and posts) continues now, in calmer fashion, as a project of enjoyable creative labour and professionalism.

10,000! The last time I had something to do with this number was when I was being paid to find different ways to introduce it to students in Grade 4. (I think I prefer the number in its present context.) Unlike then, the number has arrived with unexpected speed. I remember the last time I took a screenshot of the stats of the website was when the number of hits was 4444. I meant to take the next screenshot when the number reached 5555, but I missed it by a whisker: when I got there, it showed 5556 hits. In any case, the way the traffic on this website has grown since that last screenshot has been extremely and pleasantly surprising. After being hit a record 465 times in June, the website was at the end of 824 hits in July. And when it rains it pours. Beginning August, the website has received at least a thousand hits every month! It is this consistency that has allowed it to reach the 10,000 mark even earlier than I’d reckoned. That these 10,000 hits have come from 4384 “unique” people living in 47 different countries is really quite gratifying.

If I may, I’d now like to say a little bit about Bendre and myself. The truth is that I began translating his poetry on a whim. I seem to recall that my first attempt happened sometime in the middle of 2015. At the time, I was reading a good deal more about Bendre (than Bendre himself) in Kannada while enjoying my most productive year as a writer in English. Looking back to that time, I believe my interaction with Bendre, his life and his Kannada poetry catalyzed – in some strange, wondrous way – the English poetry I had been waiting for for years.

Maybe it was this feeling that made me take a stab at translating a poem of his. (I had only ever translated a couple of short folktales previously.) Perhaps it was because I had been reading so much about Bendre and about his ways and his poetry and excerpts from his poems that I decided to go straight to the source. Because what had happened through my reading was that I had begun to revere Bendre in the same way I’d come to revere Gauss and Euler and Newton after reading about them and their work (as related by E.T. Bell mostly) and I think maybe I didn’t want that to happen with Bendre too. So where I didn’t pursue those mathematicians’s original work, I did Bendre’s – down previously unknown, unfamiliar paths.

The first poem I took up was “ನಾನು (I)“. It is not one of his “famous” poems, but it has the distinction of being the only poem whose recitation (by Bendre himself) was videographed. With this video to look at and a recitation to inform the rhythm of the translation (more accurately a transcreation), I went to work and came up with a translation that I considered reasonable. This translation (with a couple of tweaks) would go on to become the inaugural post on the website. But what really got me going was the success I made of transcreating what is perhaps Bendre’s most famous poem — “ಗಂಗಾವತರಣ (The Descent of the Ganga)”. Begun rather impulsively, it was only with the help of Sunaath Kaka’s wonderful Kannada explication that I was was able to pull through — with the transcreation of some parts happening in a manner I myself found difficult to believe. (I’m referring here, particularly, to the portion of the poem that begins “Beloved into whose waters fell…”.) But that done, things just took off: I had properly begun my “creative engagement” with the poetry of Da Ra Bendre — Kannada’s ವರಕವಿ (varakavi: ~ heaven-touched poet), one of the world’s greatest lyric poets, and a ನ ಭೂತೋ ನ ಭವಿಷ್ಯತಿ (never before never again) phenomenon. Almost four years into this engagement, I am more or less convinced that it was destiny or fate or ಹಣೆಬರಹ (haṇebaraha: ~ writing-on-the-forehead) that brought Bendre and me together.

I’d like to conclude with a vote of thanks to the various people whose support and encouragement has vitalized this venture and given me reason to continue it. Yes, it is silly to use the number of “likes” and “hearts” and “comments” on Facebook to measure a work’s worth. But, at a time when I was just starting out and knew barely anybody capable of assessing this sort of work, it was these little taps of appreciation by friends (and the occasional stranger) that buoyed me, that helped my work, that made me keep at my translation and its publishing. (I can only imagine how pleased Bendre would have been to know that the English translations of his poetry had its own group of “ರಸಿಕ-ಸಹೃದಯ“s.)

So – my heartfelt thanks to all of you: the first readers of my work; the Facebook friends with their emoticon gestures of support; the people kind enough to write a comment telling me what they thought; the strangers from all over the world who “hit” this page and left without a trace; the sahrudaya-s generous enough to share a transcreation or two and spread the word; the very small number of bilingual Bendre-enthusiasts who’ve expressed their appreciation; the strangers-turned-acquantainces who’ve warmed my heart with their emails or messages; the recently-formed group of Bendre aficianados in Bangalore who have shown me such gracious affection; the friends and family who took the time to come to listen my talk at NIAS; the reader yet to come. Thank you.

To end, I would, at the cost of being accused of “partiality”, like to name some people whose support – each for a different reason almost – has meant more than they may ever know.